Some Relevant Concerns in our Pastoral Ministry – The Herald Magazine 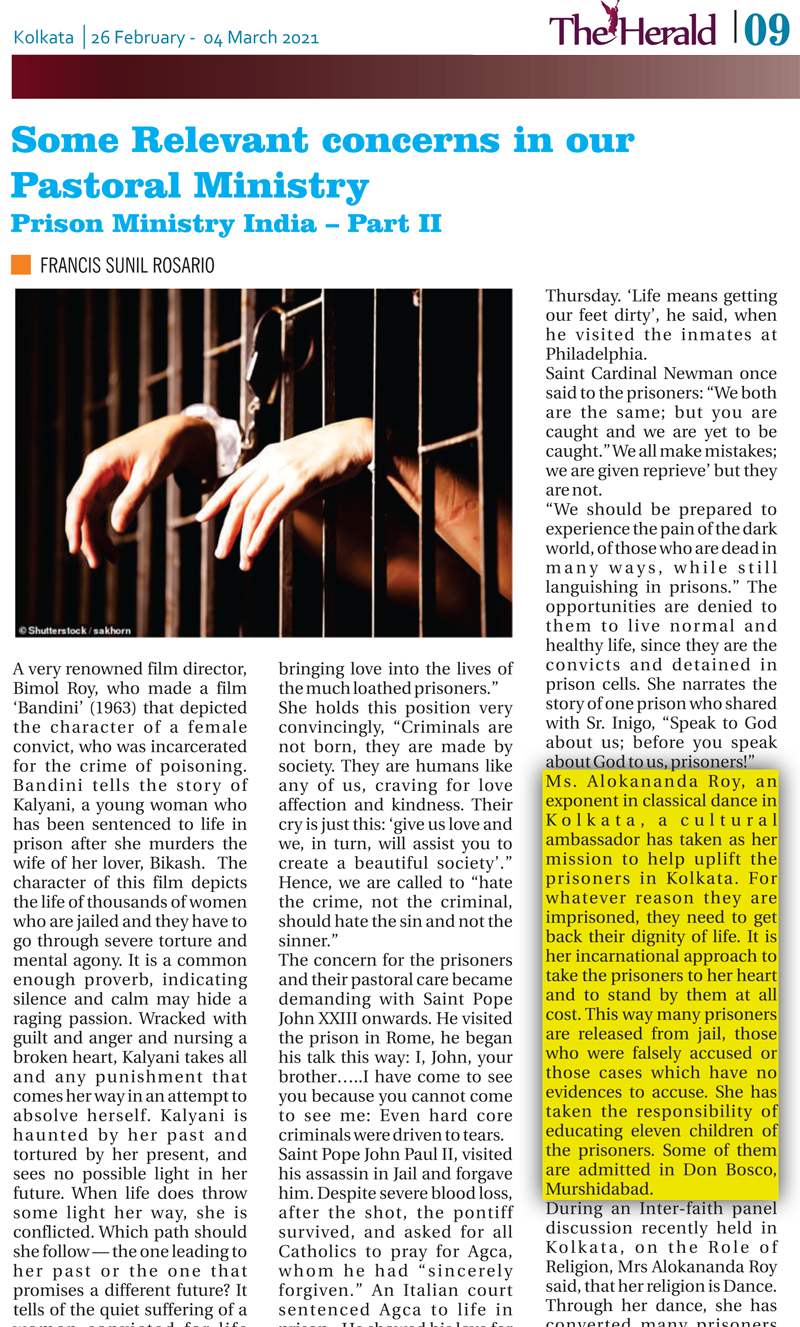 A very renowned film director, Bimol Roy, who made a film ‘Bandini’ (1963) that depicted the character of a female convict, who was incarcerated for the crime of poisoning. Bandini tells the story of Kalyani, a young woman who has been sentenced to life in prison after she murders the wife of her lover, Bikash. The character of this film depicts the life of thousands of women who are jailed and they have to go through severe torture and mental agony. It is a common
enough proverb, indicating silence and calm may hide a raging passion. Wracked with guilt and anger and nursing a broken heart, Kalyani takes all and any punishment that comes her way in an attempt to absolve herself. Kalyani is haunted by her past and tortured by her present and sees no possible light in her
future. When life does throw some light her way, she is conflicted. Which path should she follow—the one leading to her past or the one that promises a different future? It tells of the quiet suffering of a woman convicted of life imprisonment.

The story of Kalyani depicted in the film ‘Bandini’ is the story of many women convicts. They suffer humiliation, numerous mental, emotional , psychological pain leading to depression and suicide. Sr. Inigo draws our attention to concrete love, loving our neighbor. “If you have a love for one another, then everyone will know that you are my disciples” ( Jn 13: 35) Love  includes comforting , consoling, forgiving, sacrificing, instructing, healing, giving hope in times of hopelessness, and especially bringing love into the lives of the much-loathed prisoners.” She holds this position very convincingly, “Criminals are not born, they are made by society. They are humans like any of us, craving love affection, and kindness. Their cry is just this: ‘give us love and we, in turn, will assist you to create a beautiful society’.”
Hence, we are called to “hate the crime, not the criminal, should hate the sin and not the sinner.”

The concern for the prisoners and their pastoral care became demanding with Saint Pope John XXIII onwards. He visited the prison in Rome, he began his talk this way: I, John, your brother…..I have come to see you because you cannot come to see me: Even hardcore criminals were driven to tears. Saint Pope John Paul II, visited his assassin in Jail and forgave him. Despite severe blood loss, after the shot, the pontiff survived, and asked for all Catholics to pray for Agca, whom he had “ sincerely forgiven.” An Italian court sentenced Agca to life in prison. He showed his love for the man and gave him the dignity of a human being. With this kind gesture, he was totally transformed man and gave his life for others. Pope Francis has expressed his concern for prisoners umpteen times in his many deliberations. “He even surprised the world by washing the feet of the inmates in an Italian Jail, on a Maundy Thursday. ‘Life means getting our feet dirty’, he said, when he visited the inmates at Philadelphia. Saint Cardinal Newman once said to the prisoners: “We both are the same, but you are caught and we are yet to be caught.”We all make mistakes; we are given reprieve’ but they are not. “We should be prepared to experience the pain of the dark world, of those who are dead in many ways, while still languishing in prisons.” The opportunities are denied to them to live normal and healthy life since they are convicts and detained in prison cells. She narrates the story of one prison who shared with Sr. Inigo, “Speak to God about us; before you speak about God to us, prisoners!

Mrs. Alokananda Roy, an exponent in classical dance in Kolkata, a cultural ambassador has taken as her mission to help uplift the prisoners in Kolkata. For whatever reason they are imprisoned, they need to get back their dignity of life. It is her incarnational approach to take the prisoners to her heart and to stand by them at all cost. This way many prisoners are released from jail, those who were falsely accused, or those cases which have no evidence to accuse. She has taken the responsibility of educating eleven children of the prisoners. Some of them are admitted in Don Bosco, Murshidabad.

During an Inter-faith panel discussion recently held in Kolkata, on the Role of Religion, Mrs. Alokananda Roy said, that her religion is Dance. Through her dance, she has converted many prisoners into expert dancer s and changed their way of life, their thinking and their attitude to lead a life of dignity. She said she is better known as ‘Jail Janani’ (mother of jailbirds).

Her ‘Balmiki Protibha’ dance-drama speaks volumes on her commitment to the jailbirds. Based on her life and mission, a Bengali film is made ‘Muktodhara’.