Prisoner to Performer | The Asian Age 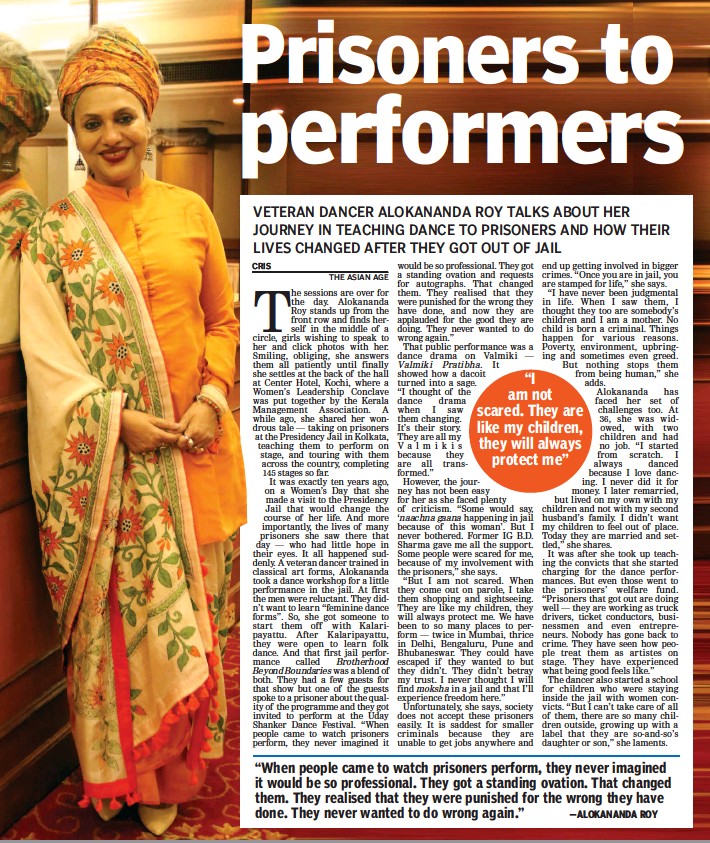 VETERAN DANCER ALOKANANDA ROY TALKS ABOUT HER JOURNEY IN TEACHING DANCE TO PRISONERS AND HOW THEIR LIVES CHANGED AFTER THEY GOT OUT OF JAIL.

When people came to watch prisoners perform, they never imagined it would be so professional. They got a standing ovation. That changed them. They realised that they were punished for the wrong they have done. They never wanted to do wrong again. —ALOKANANDA ROY

The sessions are over for the day. Alokananda Roy stands up from the front row and finds herself in the middle of a circle, girls wishing to speak to her and click photos with her. Smiling, obliging, she answers them all patiently until finally she settles at the back of the hall at Center Hotel, Kochi, where a Women’s Leadership Conclave was put together by the Kerala Management Association. A while ago, she shared her wondrous tale — taking on prisoners at the Presidency Jail in Kolkata, teaching them to perform on stage, and touring with them across the country, completing 145 stages so far.

It was exactly ten years ago, on a Women’s Day that she made a visit to the Presidency Jail that would change the course of her life. And more importantly, the lives of many prisoners she saw there that day — who had little hope in their eyes. It all happened suddenly. A veteran dancer trained in classical art forms, Alokananda took a dance workshop for a little performance in the jail. At first the men were reluctant. They didn’t want to learn “feminine dance forms”. So, she got someone to start them off with Kalaripayattu. After Kalaripayattu, they were open to learn folk dance. And that first jail performance called Brotherhood Beyond Boundaries was a blend of both. They had a few guests for that show but one of the guests spoke to a prisoner about the quality of the programme and they got invited to perform at the Uday Shanker Dance Festival. “When people came to watch prisoners perform, they never imagined it would be so professional. They got a standing ovation and requests for autographs. That changed them. They realised that they were punished for the wrong they have done, and now they are applauded for the good they are doing. They never wanted to do wrong again.”

That public performance was a dance drama on Valmiki — Valmiki Pratibha. It showed how a dacoit turned into a sage. “I thought of the dance drama when I saw them changing. It’s their story. They are all my Valmikis because they are all transformed.”

However, the journey has not been easy for her as she faced plenty of criticism. “Some would say,

‘naachna gaana happening in jail because of this woman’. But I never bothered. Former IG B.D. Sharma gave me all the support. Some people were scared for me, because of my involvement with the prisoners,” she says.

“But I am not scared. When they come out on parole, I take them shopping and sightseeing. They are like my children, they will always protect me. We have been to so many places to perform — twice in Mumbai, thrice in Delhi, Bengaluru, Pune and Bhubaneswar. They could have escaped if they wanted to but they didn’t. They didn’t betray my trust. I never thought I will find moksha in a jail and that I’ll experience freedom here.”

Unfortunately, she says, society does not accept these prisoners easily. It is saddest for smaller criminals because they are unable to get jobs anywhere and end up getting involved in bigger crimes. “Once you are in jail, you are stamped for life,” she says.

“I have never been judgmental in life. When I saw them, I thought they too are somebody’s children and I am a mother. No child is born a criminal. Things happen for various reasons. Poverty, environment, upbringing and sometimes even greed. But nothing stops them from being human,” she adds. Alokananda has faced her set of challenges too. At 36, she was widowed, with two children and had no job. “I started from scratch. I always danced because I love dancing. I never did it for money. I later remarried, but lived on my own with my children and not with my second husband’s family. I didn’t want my children to feel out of place. Today they are married and settled,” she shares.

It was after she took up teaching the convicts that she started charging for the dance performances. But even those went to the prisoners’ welfare fund. “Prisoners that got out are doing well — they are working as truck drivers, ticket conductors, businessmen and even entrepreneurs. Nobody has gone back to crime. They have seen how people treat them as artistes on stage. They have experienced what being good feels like.”

The dancer also started a school for children who were staying inside the jail with women convicts. “But I can’t take care of all of them, there are so many children outside, growing up with a label that they are so-and-so’s daughter or son,” she laments.

“I am not scared. They are like my children, they will always protect me” – ALOKANANDA ROY